But It Has Been Happening Here–A Response to Salman Rushdie 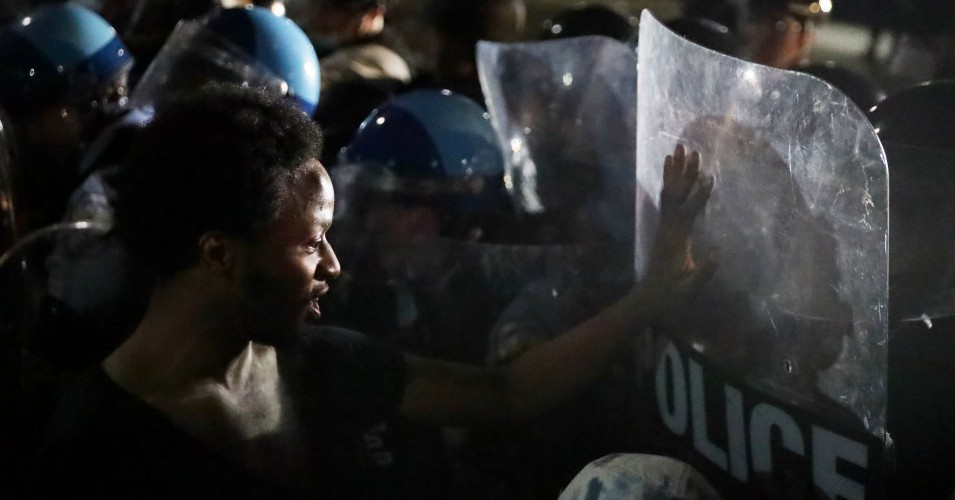 Demonstrators hold a protest in response to the police killing of George Floyd in Lafayette Square Park in the early morning hours of May 30, 2020 in Washington, DC. (Photo: Alex Wong/Getty Images/Common Dreams)

There has been a lot of talk in the Trump years about what can happen here.  Most recently Salman Rushdie warned Americans that it (martial law, dictatorship, authoritarian violence?) can happen in a Washington Post op-ed.  Such warnings have a bemusingly subjunctive quality.  If it only can happen, how do we name what has already been happening?  When do we concede that the hypothetical is indeed real?

In the last ten days, I have received two texts from aunts in Pakistan asking me the question: “What is happening in your country?” I called up each of them and asked them why they were surprised and tried to talk about the history of the United States. I tried to say that what we are seeing in the protests is a response to the violence built into the very foundations of this nation-state, in which the genocide of Native Americans and the enslavement and incarceration of African-Americans is foundational and constitutive; to the nation’s power, to its wealth, to the thoroughgoing segregation of its self-image.

In the parlance I would use easily in other countries, we could call George Floyd’s murder an extrajudicial killing, except, one wonders, whether “qualified immunity” makes these killings properly speaking “extra” judicial.  After all, the law has been the engine of black repression in the U.S. Indeed, the disturbing genius of this country lies in the normalization of profound inequity and injustice through the law, which exists in constant tension with the claims for freedom in the Bill of Rights, to which so many turn so often to say in a complex dance of delusion and denial after yet another blatant injustice, yet another merciless cruelty, that: “This is not who we are.” To which there is only one answer: “Of course, it is.” One can only hope it’s not all of what we can be.

Then, I received a text from an acquaintance in Karachi, with Mr. Rushdie’s recent op-ed. Not the link, but the whole thing, copied and pasted.  Of course, the gesture was a little bizarre and had more than a bit of schadenfreude in it—as also do many suggestions of international solidarity with the protests at this moment.  There is in them an element—how can there not be?— that says that the country that has rained terror and fear from the skies on numerous populations in the name of regime change has lived with profound and violent disorder and yet presumes to instruct and invade others. By violent disorder, I do not mean the protests, I mean the ruthless, systematized, diurnal and exhausting violence designed to create and sustain crisis in Black communities that has given rise to them.

I admire Mr. Rushdie’s early novels tremendously. And the essays, collected together in Imaginary Homelands, especially the ones calling out British racism and Britain’s inability to confront its imperial past, are simply terrific.  They had a huge influence on me when I was in college and my debt is tremendous. Yet, I find this op-ed trite.

Yes, of course Mr.  Rushdie has seen the rise and fall of dictators up close. Who of that generation, or of mine, from that part of the world hasn’t? The Indian Emergency was a catastrophe, Zia-ul-Haq’s takeover another calamity and, of course, there’s something quite familiar about curfew and political unrest to some of us, but still there’s something not quite right when  he concludes the op-ed: “In my most recent novel, “Quichotte,” I characterized the present moment as the “Age of Anything-Can-Happen.” Today I say, beware, America. Don’t believe that it can’t happen here.”

And I don’t just mean there is something off with the plug for his novel, although Michelle Alexander’s The New Jim Crow: Mass Incarceration in the Age of ColorBlindness, John Keene’s CounterNarratives: Stories and Novellas, and Keeanga Yamahtta-Taylor’s How We Get Free: Black Feminism and the Combahee River Collective are better reads for the moment.

There’s also something not quite right when he writes: “I have lived in the United States for 20 years and been a citizen for the past four. One of the most important reasons for becoming a citizen was my admiration for the ideas of freedom embodied in the First Amendment to the U.S. Constitution. Trump, whose regard for the Second Amendment is well known, needs reminding of the First, which, if I may help, states in part that “Congress shall make no law … abridging the freedom of speech, or of the press; or the right of the people peaceably to assemble, and to petition the government for a redress of grievances.”

Given his experiences, I can understand why he would focus on the issues of freedom of speech and of assembly.  Yet one must ask: which America is he addressing?  Do the protest organizers really not know it can happen here?  Has the right to assembly or speech ever been the same for everyone in America?  One can migrate here as an upper class South Asian immigrant and have a sheltered comfortable experience—the discomforts of having to appear on the Bill Maher show notwithstanding (see Mr. Rushdie’s appearance after the Charlie Hebdo killings for instance).  It was not uncommon in years past, in the elite diasporic drawing rooms in Manhattan in which Mr. Rushdie circulates and into which I occasionally parachute, to have heard sentiments denying the Black  or Native American or Latinix experience because the country is so good to South Asian immigrants—by which is meant, of course, the privileged ones.  The taxi drivers have a different story to tell.

In the same apartment of the South Asian author, where I last sighted Mr. Rushdie at a party some moons ago, I have been grilled about the work of my partner, R.A Judy, who is a critical theorist and comparatist, and author of (Dis)forming the American Canon: African-Arabic American Slave Narratives and the Vernacularand Sentient Flesh: (Thinking in Disorder, Poëisis in Black).  When I described it, I was told that it is marginal, because black people and by extension the black experience and, most insistently, their intellectual endeavor is marginal.  It is in rejection of that sentiment and of the tendency produced by the culture wars to keep theory hidden from public sight that I give the full titles here.  I bristled and said they are not marginal, they are constitutive of this society, of its formation and sustenance, of its wealth and its power.  Of course, cultural-theory-and-lit-crit-type-feminist female bristling got the reaction it usually does: patronizing dismissal.  Over the undercooked fish and impressively tasteless cucumber foam, there was also some dismissal of sweet potato pies.

There are other quotidian expressions within academic circles: A senior South Asian colleague tried to disinvite me from a conference and then discipline and curtail me because, according to him, I was dating someone he told me was a “brother” and supposedly had the backward attitudes towards women that he said come with that designation.  I’ll leave the reader to sort through the cognitive dissonance.  My point is that racism, delusion and denial within the very South Asian community that is now performing its wokeness through social media outrage need to be addressed with honesty and care. As we rush to jump the bandwagon to try to be relevant in this moment, I must say that even writing this makes me a little queasy.  There are ethics and politics of intervention and there are times to let others speak. Celebrity culture has little interest in such navigations. Note, for instance, how community activists from Minneapolis are rarely given a voice on the national media.

There are other reckonings to be had: There is the way that my field, postcolonial studies was given a certain prominence to dampen the energies of the radical strands of Black Studies and Ethnic Studies coming out of San Francisco State’s struggles in 1968. The way also in which postcolonial studies managed to avoid talking about the situation in the United States until it could no longer avoid it.  There is the way South Asians allowed themselves, or willingly volunteered themselves, to be used as good, visible minorities, and, and…

To return to Mr. Rushdie’s conclusion: The point is not that people should not delude themselves that it can’t happen here.  The point is that “it” has been happening here. Authoritarian injustice formalized by law and sustained by extraordinary supremacist violence alternating with  liberal hand-wringing, denial and quiet participation in those very same supremacist structures is part of the union.  The difference under Donald Trump is that the mask is temporarily off, that it’s happening is harder (implausibly, though, not impossible) to deny, and that it can happen to almost all of us now.

Sadia Abbas is associate professor of postcolonial studies at Rutgers University-Newark. She is the author of At Freedom’s Limit: Islam and the Postcolonial Predicament, winner of the MLA first book award, and the novel The Empty Room, shortlisted for the DSC prize for South Asian Literature, which tells the story of a woman painter in 70s Pakistan and co-editor (with Jan Howard of the RISD museum) of Extraordinary Realities, a volume on Shahzia Sikander’s art  She has written numerous essays on subjects including Jesuit poetics and Catholic martyrdom in Early Modern English poetry, neoliberalism and the Greek debt crisis, Pakistani art, the uses of Reformation in contemporary Muslim thought, and Jewish converts to Islam and treatments of subjectivity in contemporary theorizations of Muslim female agency. She has also written essays and opinion pieces for Dawn and Daily Times (the Pakistani dailies), Naya Daur, OpenDemocracy, CommonDreams and TANK magazine.  She is currently completing, Space in Another Time: An Essay on Ruins, Monuments and the Management of Modern Life about the connected afterlives of ruins and onuments in India, Greece and the Caribbean and their role in the production and control of racial, religious and ethnic identities. At Rutgers-Newark she also directs the multi-media and multi-disciplinary series, “Postcolonial Questions and Performances.”

This essay was first published in CommonDreams on June 10