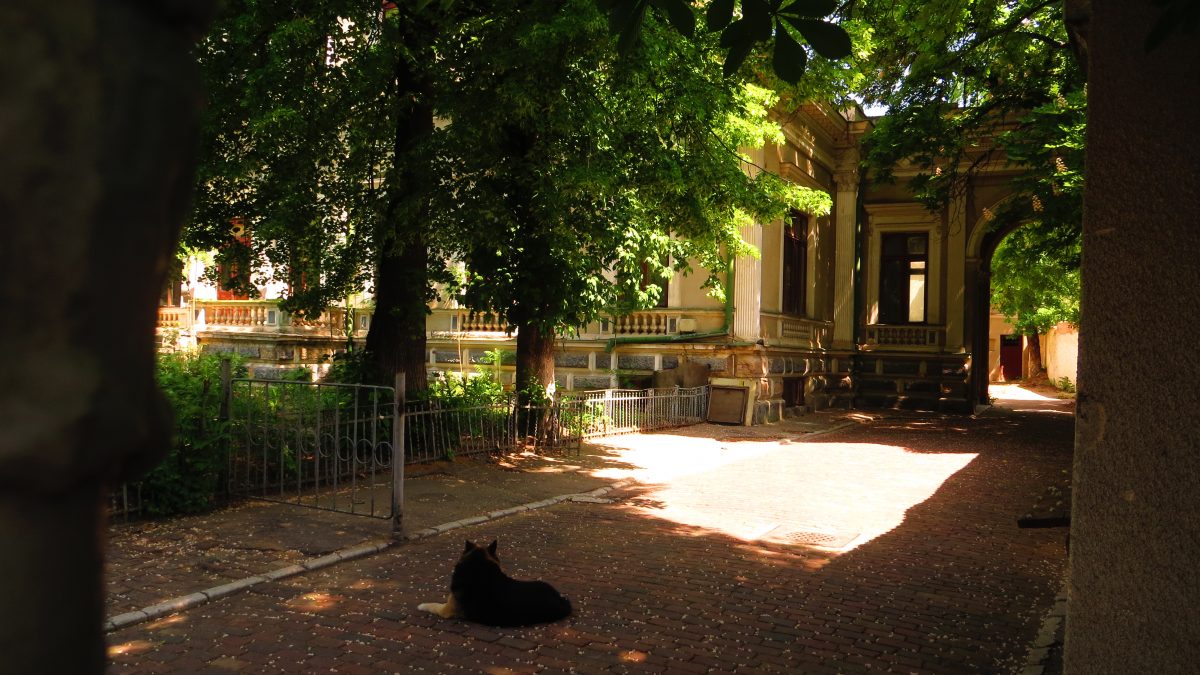 Ode to Joy in Times of Trial

I always visit between 11 and 1

when most of the neighborhood elderly

cart their pasts behind them

on wheels, in cans, bread, pasta,

democratically, for old and young.

Each in his cell, thinking of the key

as we were bathed in freedom.

Now, in the city, country, world

only the grass, flowers, trees, birds,

cats and dogs are free,

Because they are innocent, guiltless of work

and that is good, and good that

we have begun to understand why

we must stay shut inside our homes,

why the time has finally come

to find the cherubim within!

And we go out, holding our military declarations

during this everyday carnival

we all wear the same masks,

but those with beautiful souls recognize each other

even from a distance. Without hesitation.

So I visit you, just by the gate, on the sidewalk

at a permissible distance, and if I can hear

I take out two old marionettes, from when I was a girl,

and I give them a new, more beautiful fate,

and you, on the other side of the gate, in the yard,

you laugh and clap and we are together

and the street is a puppet show with improvised props,

Liliana Maria Ursu is an accomplished Romanian poet, prose writer, and translator, the author of eighteen books, including an edition of her selected poems Loc ferit (Haven, Editura Baroque Books & Arts, 2014). She has been translated into many languages, and her first book in English, The Sky behind the Forest (trans. Tess Gallager, Adam Sorkin, and Ursu, Bloodaxe, 1997) was shortlisted for the Oxford Weidenfeld prize. Lightwall (trans. Sean Cotter, Zephyr Press, 2009) won the PEN Southwest prize for translation and was shortlisted for the PEN USA translation prize and the Three Percent Best Translated Book award for poetry. Her translations into English include Angel Riding a Beast (trans. with Bruce Weigl, Northwestern University Press, 1999) and Clay and Star (trans. Mihaela Moscaliuc, Etruscan Press, 2019). For many years, Ursu produced a series of cultural programs for Romanian Radio. A two-time Fulbright recipient, Ursu has taught at the University of Bucharest, Bucknell University, and Pennsylvania State University.

Sean Cotter is Professor of Literature and Translation Studies at the University of Texas at Dallas. Winner of the Best Translated Book Award and the PEN Southwest Book Award for Translation, he has translated many books from Romanian, most recently: T. O. Bobe’s Curl (Wakefield, 2019), Mircea Cărtărescu’s Blinding: the Left Wing (Archipelago Books, 2013), and Magda Cârneci’s FEM (Deep Vellum, forthcoming 2021). He has translated two books by Liliana Ursu: Goldsmith Market (Zephyr Press, 2003) and Lightwall (Zephyr Press, 2009). He is the author of Literary Translation and the Idea of a Minor Romania (University of Rochester Press, 2014), winner of the Biennial Book Prize of the Society for Romanian Studies.