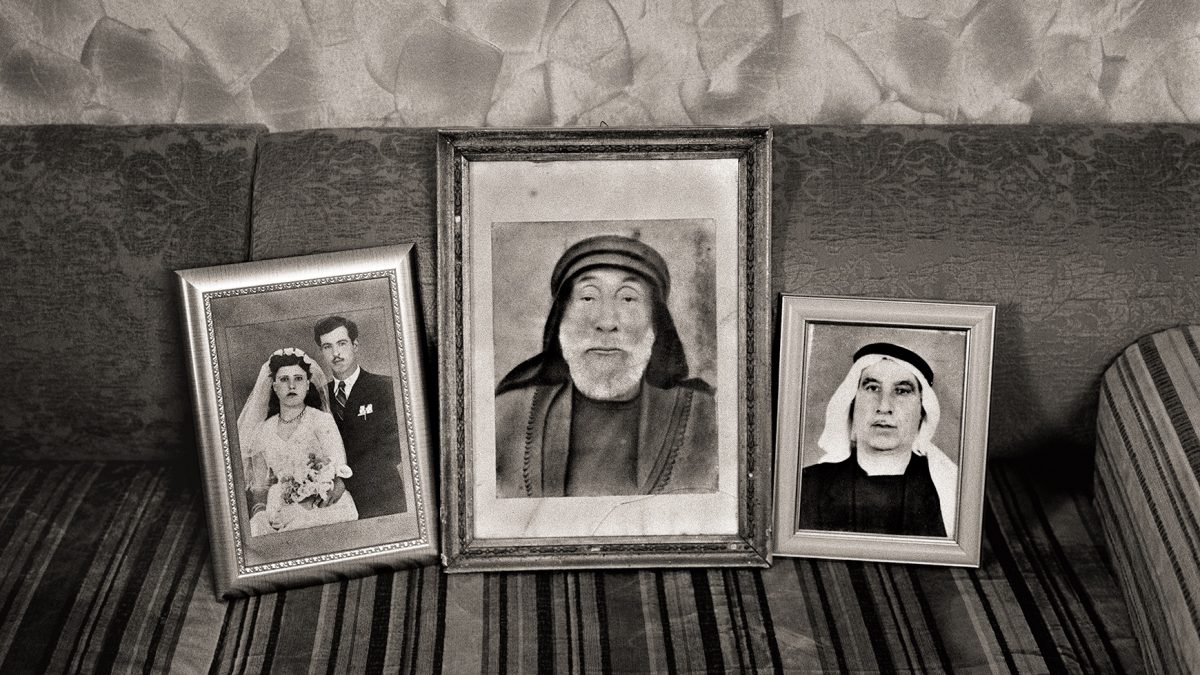 Three generations of the Maḥmūd family.

When I reached out to the wonderfully engaged, thoughtful, and brilliant photographer Fazal Sheikh, saying that we would love to run some of his work, he reminded me of an event hosted by Storefront for Art and Architecture and organized by Eduardo Cadava in the spring of 2016. At this gathering, scholars and artists, Emmet Gowin, Amira Hass, Rashid Khalidi, Rosalind Morris, Shela Sheikh, Michael Wood and I, were each asked to speak about one image from the exhibition of Fazal’s photographs from Memory Trace, which was then on display in Storefront’s gallery space.  Memory Trace is part of Fazal’s magnificent Erasure Trilogy about the attempted erasure of Palestinian history and life after the Nakba. I am very grateful to Fazal, Eduardo, and Storefront for Art and Architecture for having been given a chance to participate in this very moving event.  We are grateful to have been granted permission to upload the newspaper that was put together to accompany this exhibition as a pdf, and we will make that available  under “Resources” soon.  We also urge our readers to check out the Slought Foundation’s page on the Erasures exhibition.

At that wonderful and inspiring evening at Storefront, some spoke extemporaneously and some—like Rosalind Morris, Shela Sheikh, and myself— read from texts we had written.  We reached out to Rosalind and Shela to ask them if they would share those wonderful meditations with our readers, and they generously agreed.  Over the next days, we will put up Shela’s, Rosalind’s, and my responses.

We begin with these haunting photographs.

Post 1948: In May 1948 the village was settled by Jews who had been displaced from Jaffa and south Tel Aviv. In 1949–50 new immigrants, particularly from Yemen, arrived as part of Operation Magic Carpet and settled on the land of the former village. In the following years, the name was changed to Kfar Shalem.

In the 1970s the Tel Aviv municipality began evacuating the Jewish inhabitants in order to demolish the old houses and build new residential quarters for them.

Today: The village site is within the boundaries of Tel Aviv, with a portion ex- tending within the city of Ramat Gan. Approximately ten of the houses remain and have been occupied by Israelis. The village schools, the cemetery, and the shuttered Shrine of Sayyidna Salama remain.

Official Israeli name: The Jewish neighborhood established on the village land is called Kfar Shalem. The site of the former village of Salama has no official name and does not appear on contemporary maps of Israel.

Post 1948: In 1949 former members of the Palmach established Kibbutz Beit Guvrin on part of the village site, where its public houses used to stand. The first residents were members of the Yetzivim and Bnei Horin youth groups, Jewish immigrants from Turkey and Romania, respectively. In 1989 the Beit Guvrin National Park was established on part of the village site.

Today: The ruin of the mosque has been partially buried and the house of the mukhtār remains open and gutted on a hilltop nearby. Behind the mosque one empty Palestinian house stands beside the remains of the cemetery. Several other houses have been occupied by the kibbutz. In 2013 the area of the Beit Guvrin caves, which includes the village site, was made a UNESCO World Heritage site.

Official Israeli name: Beit Guvrin (the ancient name of the place). The former village of Beit Jibrīn no longer appears on the contemporary map of Israel.

Occupation date: Attacked on January 29, 1948; depopulated by early February Occupying forces: The Stern Gang (also known as Leḥi) reprisals on the out- skirts of the village; Haganah and Etzel military activity in the vicinity Occupying operation: N/A

Post 1948: In February–March 1948 Jews evacuated from front line Yemin Moshe were resettled in empty houses in Lifta. In May of the same year, Lifta was settled with Jews evacuated from ʽAtarōt, which had fallen to the Jordanians, and later with immigrants from Yemen and Kurdistan. By the 1960s, most of the afore- mentioned had left. In 1950 Lifta was annexed to the municipality of Jerusalem. The Givʽat Shaʼūl neighborhood of Jerusalem was extended onto its land, as well as Upper Romema and Sanhedria. In the 1970s the high-tech industrial area of Har Ḥotzvim was built on village land. In 1959 Lifta was classified as a nature reserve. In 1974 the neighborhoods of Ramot Alon, Ramat Eshkōl, and Givʽat HaMivtar were established across the green line on land from Lifta that had been annexed to the municipality of Jerusalem. In 2006, a plan to build a luxury neighborhood in Lifta, including 268 new housing units and the renovation of existing houses, was approved. Due to financial, bureaucratic, and technical reasons, the plan has not been implemented.

Today: The mosque, school, and around 55 houses—mostly deserted, with some inhabited by Jewish families—remain on the site. In the intervening years, homeless people, drug addicts, and even a gang of Jewish extremists who planned to bomb the Temple Mount mosques have found refuge in the empty houses of Lifta.

Official Israeli name: Mei Neftoaḥ (the biblical name identified with the place). The Arabic name, Lifta, appears on some contemporary maps of Israel.

Post 1948: On May 1, 1949, the Israeli military entered the village and detonated the houses.  In April 1950 Mevo Beitar (a cooperative village) was established on village land by immigrants from Argentina and native Israelis of the Beitar movement (a revisionist Zionist Youth group founded in 1923). The JNF’s Begin Park was later established to commemorate the sixth Prime Minister of Israel, Menachem Begin, with a picnic site beside the ruins of the village’s former mosque.

Today: The rubble of former houses is scattered throughout the woods of the JNF park. The shrine of al-Sheikh Ahmad al-ʽUmari remains beneath a tree on a hillside near a spring and a steep series of steps descends to the ancient spring and cistern.

Post 1948: In September 1948 most of the village and monastery of Deir Rafāt was blown up.1 In 1948, Kibbutz Tzorʽa was founded by members of the Palmach (Palmāḥ, the elite fighting force of the Haganah) on village land. The Givʽat Shemesh educational institution was established on village land in 1954.

Today: Rubble from the former houses and shifted stone terraces blanket the site. Givʽat Shemesh has become a drug rehabilitation center. A portion of the village site is occupied by Bedouins of the al-Saniʽ tribe, who rent land from the nearby monastery.

Official Israeli name: None. The village does not appear on contemporary maps of Israel.