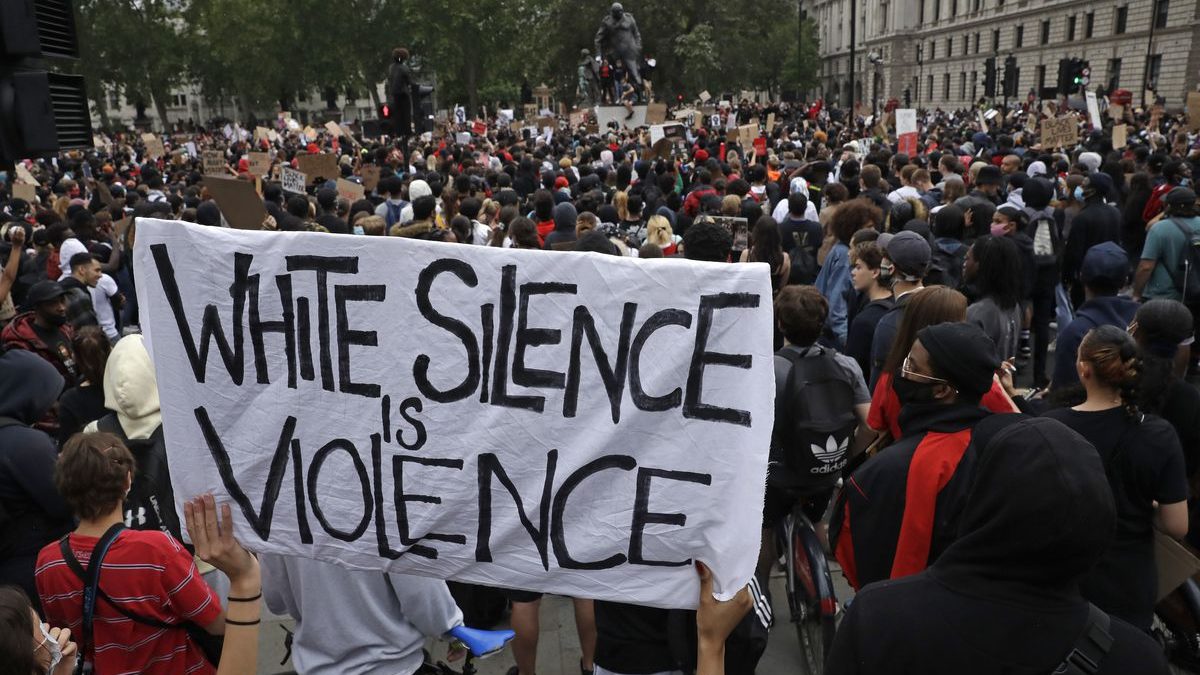 Will the support of white people in this moment really hold?  Or will we/they feel under attack soon and leave?  Who cares?  White people should.  Perhaps whites finally feel some of the pain of racism because they have felt a bit of what it feels like to be Black and Brown—to be thrown away by their government and ordered what to do with no clear explanation. Has this (new-ish) context pushed white people to a new racial empathy?

This is an amazing contradictory moment we are in: white supremacy is in crisis and the rapaciousness of Covid-19 democratizes the swath of vulnerability and exposes truths while creating new comrades, particularly many white people.  Covid-19 is devastating—racially, economically, environmentally, but it also promises the possibility of a newly shared humanity. I want to see and name the possible promise of this moment as a path forward for a sustained anti-racist feminist mobilization of white people, especially, but without centering them.

The struggle against white supremacy co-habits alongside the structures of anti-Blackness. Black people have fought slavery, discrimination, exploitation, racist brutality since they first were captured and enslaved.  It is white people’s enforcement and complicity in this oppression that has sustained it. Although there have been some whites who have fought against anti-Blackness, there have not been enough to uproot the catastrophe of this suffering.

Communist parents whose first commitment was to the civil rights movement raised me.  My three sisters and I were nurtured in a family that was loved and bolstered by our Black friends. Our parents were relentless in trying to make sure that we were never silently complicit in racial oppression.  It was hard being their daughters, but they always made clear that there was no other choice.  So I have wondered in these last several weeks since the killing of George Floyd why so many white people—especially young people—have stood up and against white supremacist police brutality. Why after so many/too many brutal police killings for decades did George Floyd bring out a massive multi-racial protest movement? And this movement seems to have legs.

Or why not when Emmett Till was brutalized and murdered?

Or why not when Martin Luther King condemned racism as integral to militarism and the Vietnam War? Or then after he was assassinated?

Or when Malcolm X was murdered?

Or when Rodney King was mercilessly beaten long after he was able to move by a cabal of police? (I was sure the 1992 rebellion was going to grow and be maintained.)

Why not when Trump began the birther movement against Obama?

One can say that the times were different and the context more muted.

Many have written that the murder of George Floyd was the last straw, it was just too much, to watch his slow, long torture on tape, listening to him call for his mama as he could not breathe.

Yes, it was too much.  But there have been many “too much” moments before.  So, why now, and especially for white people?

Maybe, because of Covid-19 and the catastrophes it brings.  Covid has rampaged its way through communities of color but its universalized terror engulfs white people too.

And, white people—especially those of the middle class–are not used to the government ignoring them, lying to them, and letting them die.  No PPEs, no ventilators, no testing, no tracing/tracking of infected peoples.  White people are terrified: of the virus and being left abandoned by Trump’s government. They lost their jobs.  They stood on food pantry lines.  I am not talking about Trump’s white people.  I am talking about the white protestors supporting Black Lives Matter.

Covid19 undercut white’s people’s privilege in a universal way, in a similar fashion that racism undercuts Black lives daily.  Similar does not mean the same at all.

The US is on its way to 140,000 deaths attributable to the virus. The enormity and randomness of a sort, and universality of the vulnerability newly cuts across racial and class lines although very differently.  The randomness of disease is the closest thing to democracy that we know in the US. even though Black and Brown people are dying of Covid at enormous rates compared to whites.

Black and Brown people have known the vulnerability that many White people now feel. They live with bodily vulnerability—to racist environments, and violent police, and unemployment, no matter their class.  It is vital to recognize that this newly shared vulnerability is possible because of the catastrophe of Covid-19 that potentially exposes everyone to the new virulent viruses of the endangered environments of our planet.  So it is important to recognize what has brought many white people to their newest understanding and critique of white supremacy.  A universal understanding of their and Black and Brown people’s shared bodily vulnerability.  You might have hoped that this would have always made white women more anti-racist as they experience their own vulnerability to rape and sexual violence.  So there is something more to think about here.

I am not bringing white people to the center of this extraordinary moment. The anti-racist struggles led and built by Black and Brown people of at least half of a century have brought/led us here.  But it is fantastic that so many white people, especially young white people are standing against white supremacy.  But knowing why is how we might finally use this new militancy beyond this particular moment.

When Floyd is graphically murdered for all to see—everyone could feel the trauma, the vulnerability, the repetition of the misery in his and their lives. White people could begin to see a bit of ourselves in the shared unique catastrophe of this Covid moment—a moment that provides a rare potential for connectivity to a totality of human suffering and grief.

This is not a time for closure or sure-footedness.  It is time for white people to risk everything to demand we stay vigilant against anti-Blackness.  It is a time to be uncomfortable.  And, if we are headed to a civil war in November choose your side.  There is no middle, so ask yourself which side you are on and then stay the course.  The time for an anti-racist socialist feminism, if ever, is now.

Dr. Zillah Eisenstein is a ground-breaking political thinker, writer, and activist always looking to find new anti-racist socialist feminist pathways. She is the author of more than twelve books and hundreds of articles detailing the continual struggles for social, racial, economic, environmental, gender, sexual, and bodily justice by women of all colors across the planet. Her newest book is Abolitionist Socialist Feminist: Radicalizing the Next Revolution (2019). She is Professor Emerita of Political Theory, Ithaca College, NY. Access her writings for Al Jazeera and Feminist Wire at https://zillaheisenstein.wordpress.com/