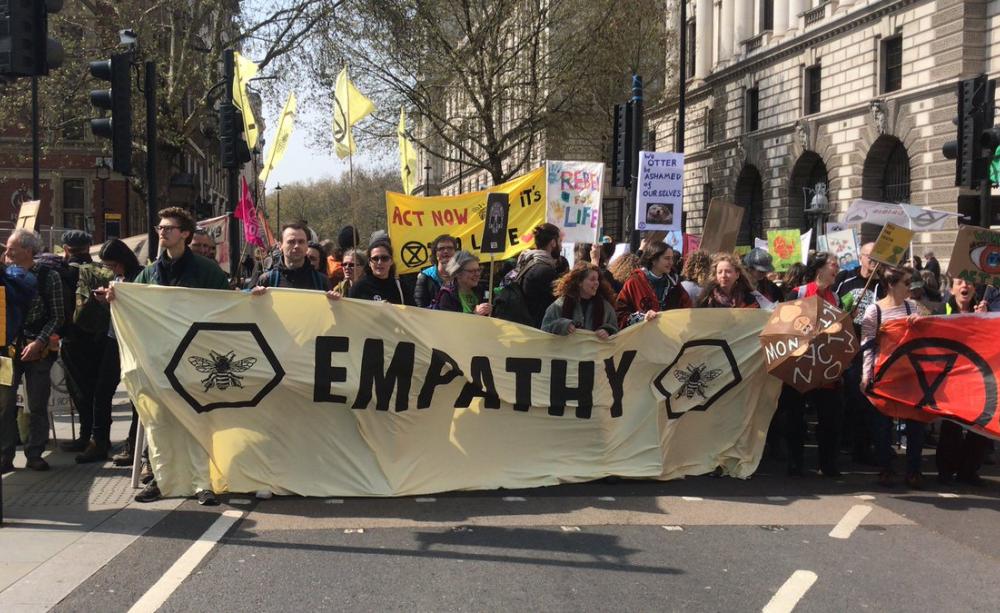 By its very name Extinction Rebellion links animals, as the conventional candidates for extinction, to the human-beings who still retain sole possession of rebellion. Are humans meant to fear their possible relegation to animality by such an association, or joyfully to acknowledge it? This ambiguity lies at the heart of a movement that puts into question the relationship of the human and non-human, one whose co-dependency is only betrayed by the false identity of anthropomorphism.

Assimilating the animal to humanity only strengthens the latter’s dominance over other species, something that has precipitated our ecological crisis. Identifying humans and animals, moreover, can only be done by excluding other forms of plant and organic life as being less worthy of care. But this makes no ecological sense, since the latter are more important to life’s maintenance than the former. Yet recognizing the connectedness of all life forms destroys rather than enables any kind of identity with them.

The ambiguity of Extinction Rebellion’s name allows us neither to assimilate nor identify with animal or other life forms. This was the way in which Gandhi, a most important precursor of today’s ecological thinking, envisioned our relationship with the non-human. Rejecting industrial capitalism’s environmentally destructive cult of limitless desire and limitless growth for an equality that was premised upon restricting both, Gandhi also attended to the relationship between human and animal that comprised the foundation of all exploitation.

He understood even humanity’s most transcendent form as a universal and inclusive identity to be a violent one. The celebrated empathy meant to define such a conception, after all, depends upon biological notions of similarity and similitude no different in kind from those that characterise racist and other exclusionary identities. Only by repudiating a humanity residing in shared linguistic, sexual and dietary relations is non-violence possible. For as Gandhi pointed out, such biological relations defining the species have historically divided rather than united human beings.

Only because no generalised sexual, linguistic or dietary communion exists between humans and animals, in other words, can their relations become non-violent. The animal has to be cared for not because it is like us, but because we cannot share any carnal, communicative or commensal relationship with it. Instead of taking human relations as a model for those we should enjoy with animals, Gandhi did the opposite by renouncing the sliding-scale logic of similarity and similitude that made a narcissistic humanity into a threat for itself and others.

Our care for animals as much as fellow human-beings occurs in the absence of any sure knowledge about or identity with them, revealing its most pure manifestation in sacrifice. And sacrifice was crucial for Gandhi not because it is made in the name of some larger identity, but even against the interests of humanity. He held that the self-interest we recognize as bad at an individual level does not cease to be so at a collective one. Interest itself is a capitalist principle that converts everything it names into a form of property to be defended against others.

For Gandhi service or sacrifice defined human relations more than self-interest, and he pointed to the fact that no society could survive without the voluntary sacrifice of its members for one another in both small and large ways. The problem is that these relations have increasingly been confined to ever more narrow circuits, such as those between lovers, parents, children and occasionally between coreligionists or citizens. Even here they have been corrupted by self-interest, construed as the sacrifice of smaller for larger identities.

Yet, unlike the ancient pedigree enjoyed by sacrifice, interest is a product of modern capitalism, whose naturalisation required strenuous efforts over many decades if not centuries. If sacrifice, in Gandhi’s view, has to be recovered in non-cooperation, civil disobedience and even death, this can only be done at the expense of the self-interest that seeks to supplant it. Extending that view, Extinction Rebellion, too, cannot rely on the notion of interest, however broadly conceived, without falling back into the logic that produced the crisis it wants to address.

Sacrifice has become ubiquitous in the post-Cold War period, whose bipolar world had by contrast been governed by a politics of interest. The emergence of a global arena after the war led to the crisis of interest, which the huge disparity of power in the new geopolitics rendered irrelevant. While the ‘suicidal’ militancy of Al-Qaeda and ISIS represents the return of sacrifice in its most perverse form, new urban rebellions and occupations also mark the sites of its emergence. Environmentalism, too, means sacrificing the interest of ‘convenience’ and its carbon footprint.

Sacrifice also entails abandoning rights, which are linked to self-interest and humanization in forms like ‘animal rights.’ Moreover, the principal right, that to life, provides the very basis of self-interest, which Gandhi refused for a duty whose primary and so disinterested virtue is death. Today preferring duty over rights and death over life has been bowdlerized in Islamic militancy. Even terrorists recognize with Gandhi that duties are individual and inalienable but not rights, which must be guaranteed by the state and its narrative of life, identity and interest.

Yet self-interest is precisely what prevents action on issues like climate change, even when we seek to expand its penumbra to cover the entire human race. For interest only becomes possible plurally and competitively—there can be no interest of humanity unless it is against the non-human or even the inhuman selected from among us. Gandhi argued that it was always the desire for life as self-interest’s principal form that led to the violence and the death of others. Whereas the duty of sacrifice protected life precisely by disdaining it.

While the rivalrous relationship of interests was made visible to Gandhi by the colonial state’s politics of divide et impera, in one way or another they hold true for any liberal dispensation. So how should Extinction Rebellion engage a state that remains the only legitimate political agent of the international order? Without succumbing to its logic of life and identity, rights and interest, for to do so would be to negate its own sacrificial dynamism. The movement should be kept outside the state’s conceptual realm as far as possible.

This can be done by expanding the role of duty and sacrifice in social life outside the state’s language of rights and interest. Emphasizing the movement’s non-violent character also allows the violence of sacrifice and death that is now formative of all action in the global arena to be subsumed and sublimated. But this is only possible by refusing to be trapped within an apocalyptic vision of the future, which by calling for instrumental action to ‘solve’ the crisis discards duty and sacrifice to revive the narrative of life and interest, similarity and similitude.

Gandhi famously separated means from ends, not simply in order to prevent the former being justified by the latter in potentially violent ways, but since he thought instrumental action of the kind favoured by political and economic agents to be violent by definition. Trying to control or produce the future through such action is a futile enterprise not simply because it is impossible, but because it closes off other possibilities while having to deal with the unintended consequences that turn even successful acts into new problems.

The task of non-violence is not to force specific outcomes but create new circumstances. These possibilities allow instrumental actors like states opportunities they cannot themselves produce. In the post-Cold War global arena within which our ecological catastrophe must be addressed, instrumental action is difficult. Environmentalism has thus become sacrificial by adopting individual and collective practices of renunciation that cannot by themselves halt extinction. These now require expansion from lifestyle choices to a rebellion that creates new circumstances for political action.

Faisal Devji is a Professor of Indian History and Fellow of St. Antony’s College in the University of Oxford. He is a Fellow of the Royal Historical Society and Institute of Public Knowledge Fellow at New York University. Devji is the author of four books, Landscapes of the Jihad: Militancy, Morality, Modernity (2005), The Terrorist in Search of Humanity: Militant Islam and Global Politics (2009), The Impossible Indian: Gandhi and the Temptation of Violence (2012) and Muslim Zion: Pakistan as a Political Idea (2013). Devji is also a contributing editor for ‘Ideas and Futures’.