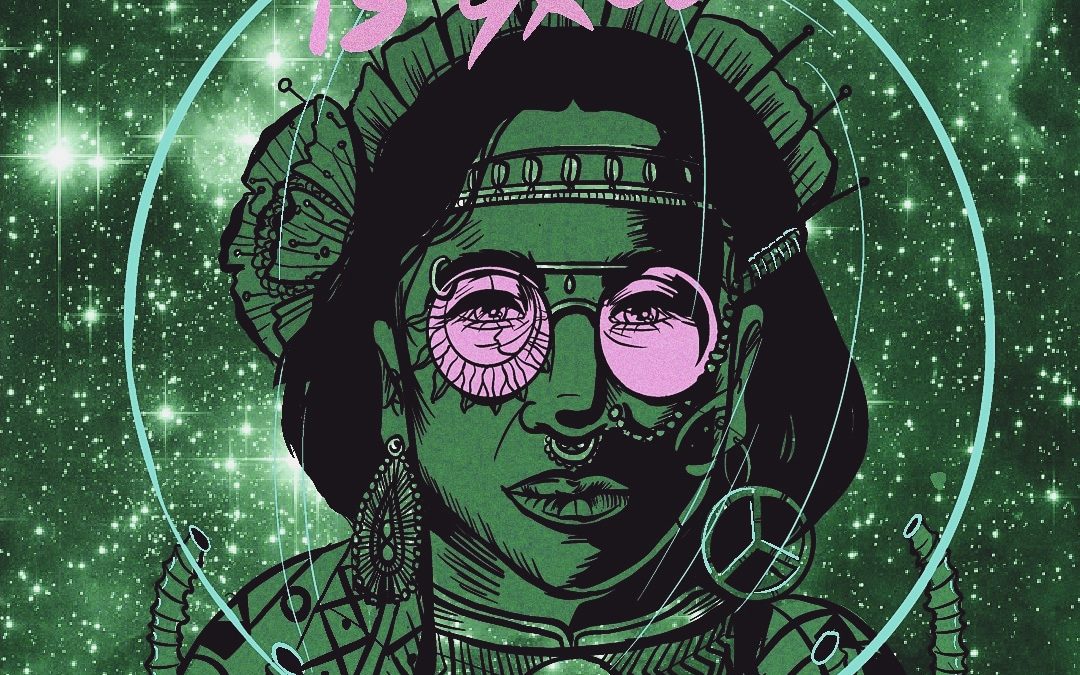 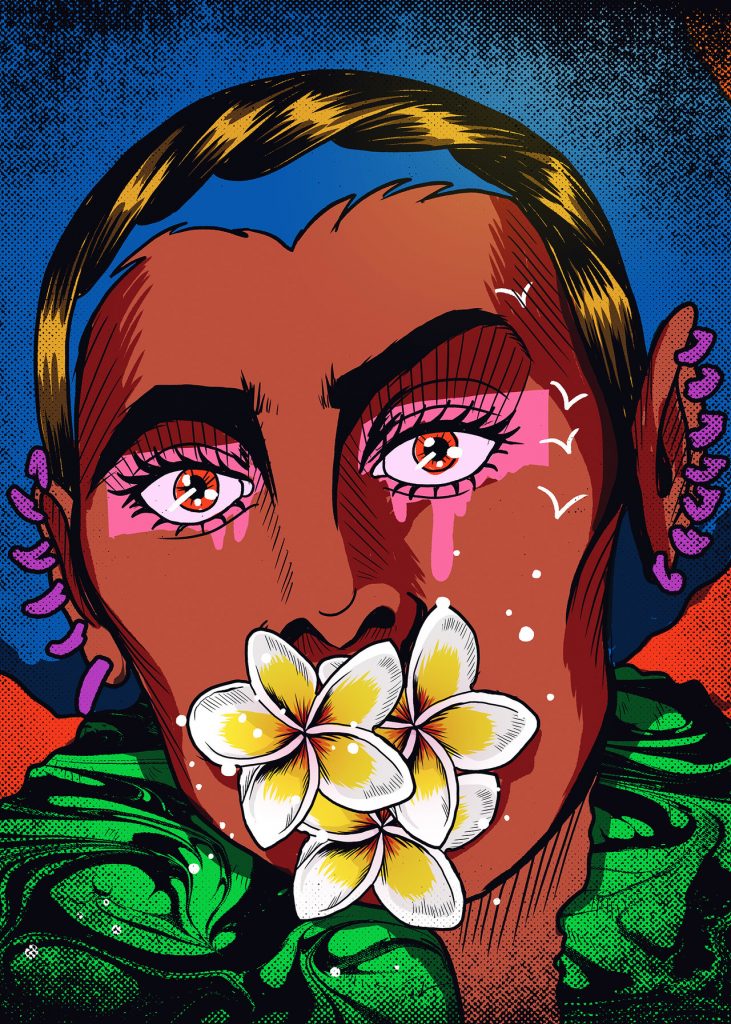 One of the major reasons that coronavirus has overwhelmed the world is because humans have trespassed and destroyed natural habitats that have existed for centuries. We have gone into the wild and devastated indigenous communities, animals, plants –– entire ecosystems. Now this pandemic has hit every crack in every society and bust it wide open. We can’t go back to ‘normal’ because our normal was broken to begin with. Now is the time to think radically of a greener new world order. And if you think that’s a given, you aren’t paying attention to governments around the world who continue to doubledown on using fossil fuels, on cutting more trees, on relaxing laws on carbon emissions and environmental protections. We need global political pressure to change the system. And that’s on all of us. 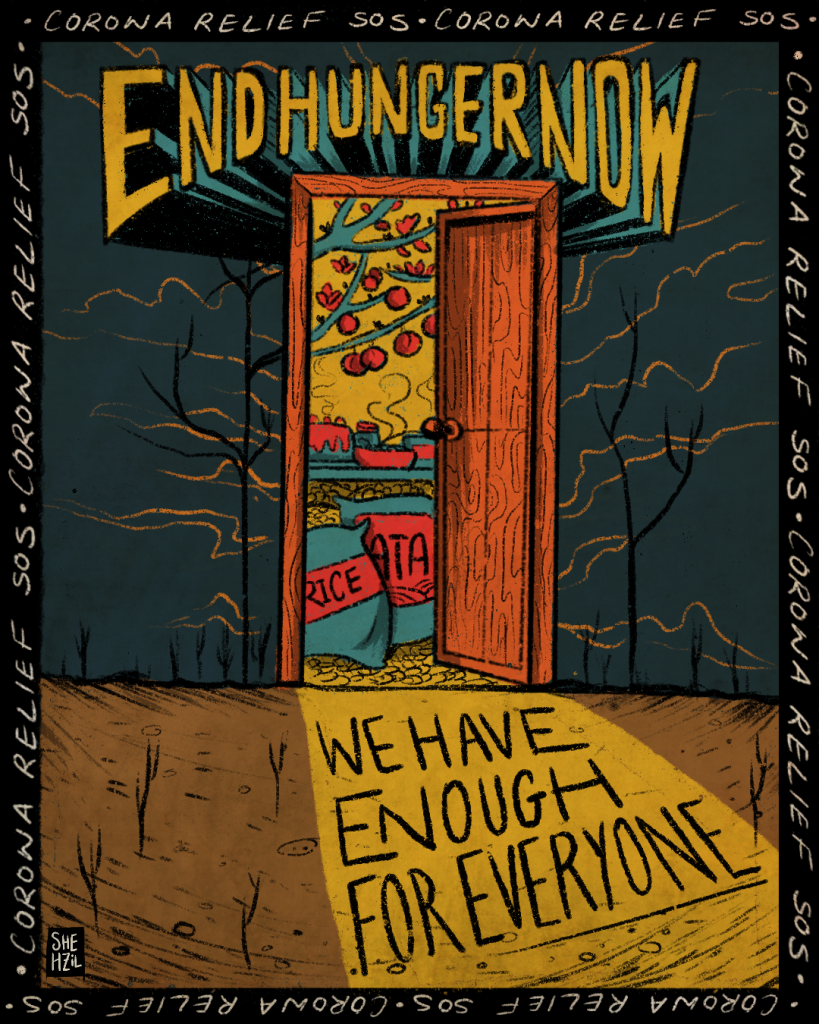 When Pakistan was locked down, daily wagers and their families were the ones to be most severely hit. My entire life, I have wondered how can we end poverty? According to the WHO, at least half of the world’s 7.6 billion people cannot access healthcare even in normal times. Because of this pandemic, the world can no longer ignore poverty- as the rich have learnt, we are all only as healthy as our sickest, most vulnerable people. If at this point, we are able to design and implement a system that reaches everyone- we can change structural inequalities. One volunteer narrated that as they gave out rations, a man broke down in tears saying his family hadn’t had so much to eat in the last 5 years! It’s the year 2020 –– no one anywhere should go hungry when there is enough wealth in this world. This is not a utopian fantasy but the redistribution of wealth activists and academics have been talking about for decades. It never happened because those in power never cared enough, and the rest of us never put enough pressure. But the time to change is now here.

A few years ago, I was selected for a fellowship in Australia. On the very first day, we met an aborigine tour guide. He told us about the colonizers who came to the continent and how they systematically wiped out his people and took control of the land. Everything we now saw around us- from the blades of grass to the trees, to the birds in the sky- were not native to Australia. Here we stood, in the middle of a beautiful city, when he told us to close our eyes and imagine this land centuries ago. Originally, this had been a swampland rich with Eucalyptus trees; the aborigines had lived within the ecosystem. He told us now there were no purely aborigine people left. After what’s called the “Stolen Generations”, their way of life, their songs, their language- were mostly lost.

I could not stop thinking about what he had said. I wondered, what if the aborigine people had still been custodians of this land- what would this fellowship have looked like? Would they have taught us how to live in harmony with nature?

When I look at the Global North, so many of the countries we admire have a history of genocide or slavery; they were built upon the ashes of human suffering. Still, our ideas of development remain centered on industrialization –– a process that in the timeline of our planet is shorter than a blink of an eye –– but what has brought our planet to its knees. We are currently facing a 6th mass extinction.

When we talk about development, we often think of skyscrapers, highways and unbridled consumption- but the cost of these ideas is a planet that is fast becoming unsustainable for all of us. Countries in the Global South are nowhere near this kind of industrialization, but we will suffer the consequences of climate change the worst. My trip to Australia was years before it had became hard to breathe in Lahore, but even then I realized we need a new global model for development. In my dreams for Lahore, I don’t imagine New York. I imagine a village, a city of gardens- a place where we live communally and at peace with nature. Perhaps it’s time we go back to our indigenous ideas of prosperity and reevaluate what we think of as development. 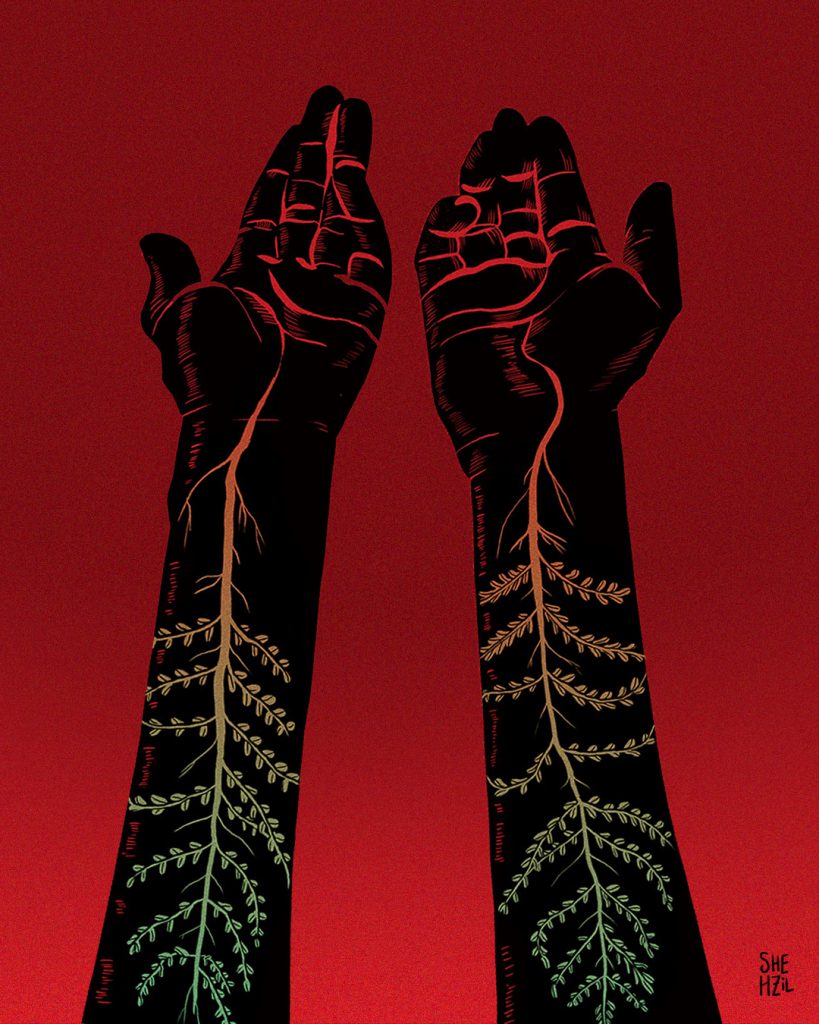 When I first drew this, it was about taking your destiny in your own hands. Now I’ve flipped the image as an appeal to those in power to take our lives seriously. I was born in Lahore and it’s only the past 3 years that the best time of the year has become a different season of smog. When I watch our Minister for Climate Change  deny outright the air quality statistics and laugh at the reports of citizens’ panic, I am horrified. If the minister doesn’t even acknowledge the problem, how will we tackle the pollution or at least warn citizens of the precautions to take? The smog is not always visible as a cloud of smoke, but the poisonous air particles you are breathing are still there. This is an invisible threat that scientists and environmentalists are monitoring and sounding the alarm. The steps to mitigate this disaster are available- they are not impossible to implement nor are they financially ruinous. All that is required is political will. We will see the effects of ignoring environmental challenges when our children grow up with diseases at a scale we will not be able to handle. It’s time to take matters into our own hands and become active citizens. 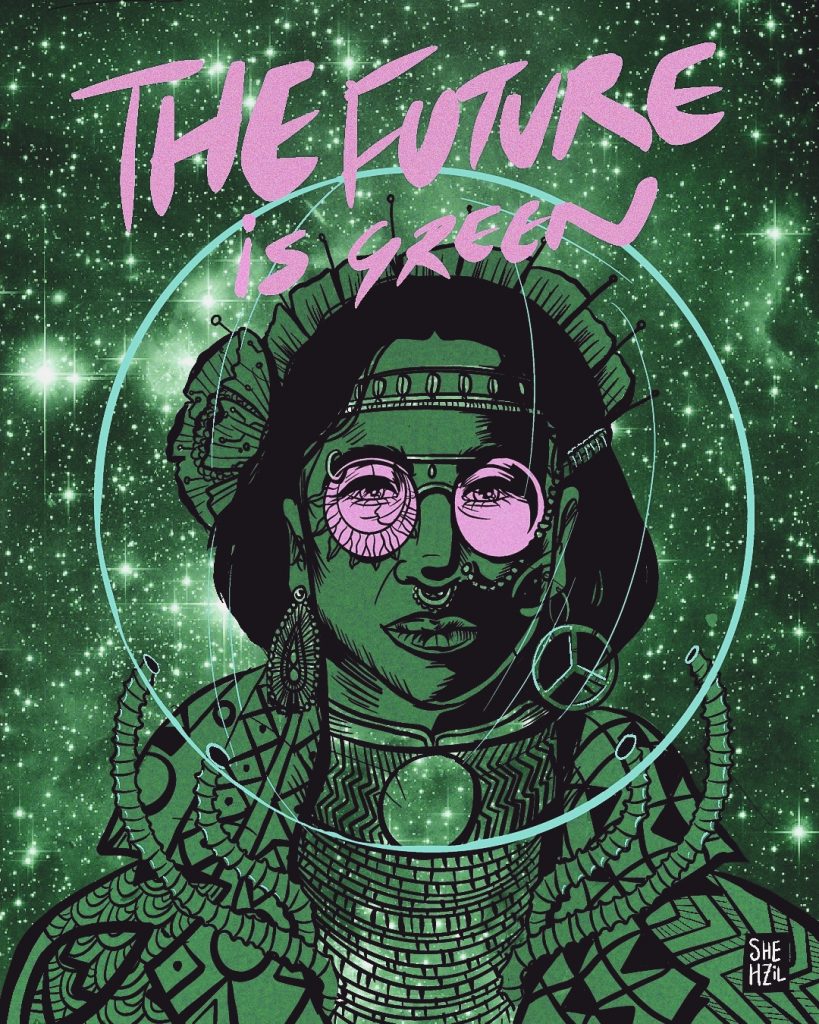 The Future is Green

For the 50th Earth Day I went straight to science fiction. I thought, what if our visions of the future weren’t based on our existing eurocentric, misogynistic, industrialized norms? Einstein said, we can’t solve problems by using the same kind of thinking we used to create them. So I imagined a new timeline—one where the world never got colonized,indigenous people and their knowledge were given the space to evolve, to develop their own scientific practice, ,here knowledge on how to grow things, use your hands, work with animals, leverage natural materials, use biomimicry was at the core of innovation. I think of Neri Oxman and her lab where plant and animal matter is used to create new material technology. There is an idea in many indigenous cultures that people are not the owners of land, but its custodians.  Imagining an eco future (less Bladerunner and more Wakanda) is at least a starting point for the radical thinking we need. The artwork also bears a resemblance to the vision of Parveen Rehman, architect, social activist and director of the Orangi Pilot Project who worked to document and protect Orangi from the land mafia. She was murdered on 13 March, 2013.  So it became an accidental tribute to an astounding woman on the Earth Day.

Shehzil Malik is a designer and illustrator from Pakistan with a focus on human rights, feminism and South Asian identity. She is an internationally published book illustrator and leads a studio that works on social impact projects and collaborations in fashion design, publication design and branding. She is a Fulbright scholar with an MFA in Visual Communication Design from the Rochester Institute of Technology and is part of the International Development Innovation Network.